The band above tries to make it work for them in media. The film “Cat People” on the other hand explores the notion that we are, after all, fairly primitive and that beneath a thin surface of civilization we are nothing but crude animals – at least some of us. Below the soundtrack – watch it on Youtube!

And yes – most of us are “green” in the sense that we are rookies when it comes to handling software.

But don’t we have quite a sophisticated world with amazing tools, science and software that can send rockets to the moon and beyond? Yes we do have created a world that perhaps would appeal to a Renaissance man like Leonardo da Vinci. Leonardo was of course no ordinary guy but had extraordinary talents. On the other hand, it was much easier to be a Renaissance man in the actual Renaissance than it is now.

Today we have built ourselves a context that is so complex that it goes far beyond anything Leonardo would have imagined – and he was fairly imaginative!
But we are trying to demand from every person that he or she should be able to do everything. Only in the workplace we should all be doing creative work, administrative chores, sales, marketing AND handle all the technical stuff we have around us – including the software. In order to save money on specialized staff of course. But on the other hand everything is also going in the other direction forcing us to be more and more specialized. You should have your niche and stay there too. So we get Social Media Specialists, Stylists, Communication Strategists and Future Managers. But the Social Media Strategist has to be good at admin, sales and perhaps even taking out the garbage. And this is only in the workplace. At home the complexity continues, but let us not go there.

Let us instead take a dive into software. In a world where everyone should do everything, everyone is also at one point meant to tackle all the different kinds of software in the office.  And we have a situation where we are flooded with huge amount of information through a blizzard of information sources. I have said it before, but it seems the more information we are exposed to the less knowledge we get out of it.
We have more information than ever and know less than ever.

So here we sit in our office starting up our laptop because we have to make a little change in one of the files in a project.

We know that humanity has learned a lot about the human brain, the human psyche and human reactions, feelings since the days of Leonardo. Naively we actually do believe that all this knowledge actually is built into the software we are about to use. But no! Leonardo himself might not have immediately understood how to use the software let alone a poor colleague that is not a full time programmer. In short – most software today are too complex and too comprehensive to be as intuitive as we would like.

There are numerous examples of software that really are too hard to learn. AutoCAD, MicroStation, ArchiCAD, 3D Studio, Photoshop and Microsoft Word are only a few of them.

First we might think a Manual would do the trick or a Training class. But Manuals are harder and harder to find and many software producers produce less and less Manuals. Most Manuals are digital too – you have no book to have on the side as you had in the old days. But the Manuals we do have do not do the trick anyway. They are full of terminology and are so lacking in pedagogy that you have to know the answer already to be able to find it in the Manual or help section. Another thing about Manuals is they always focus on a single tool and how to use that. The Manual never tells you WHEN or WHY or in relation to WHAT or even HOW to actually set the tool up to actually produce the desired result. So the Manual is not it. And neither are the vast amounts of so called “Bibles” or the “All-in-One-Books” or the “Whatever for Dummies” that are all designed to make money for the publishers. The Manuals are like Manuel the Bell Boy in the British TV-series “Faulty Towers”, never having any information and causing confusion. But this time leaving us to say “Que?”

Then we would guess that the Support department for the software would be able to help us. If we are lucky we actually get a living person on the phone that even speaks our native tongue. Then we have to explain the situation to that poor Support guy for him or her to guide us. Imagine a seven year-old boy inside a 747 trying to explain to the air traffic controller that he needs to land the plane and imagine what the controller is in for at that moment. Not an easy situation to be a Support guy.
And there are too few of them heroic types to go around. Support – I don’t think so.

But a Training Class using course materials for three or four days then? Well, the software is usually so complex that four days would only scrape slightly on the surface of it. And even if the trainer is the “Deepak Chopra of Software” chances are that the students forget 75 percent of what they might have learned after about five weeks. And the course material will most lightly suffer from the same “disease” as the Manuals and the “Bibles”! So training might not work so well either.

What then remains is the actual software in relation to us humans.
As most of us are neither rocket scientists nor Nobel Prize winner material – but only users who want to know how to design a house, a bridge, a chair or something – we need a software that is simple to use, intuitive and consistent. But a quick look into several software products reveals that the software we have to settle for today is nowhere near our ideal product.

The first problem is the complexity. Just as people today are faced with the impossibility of being good at everything, software suffers from the same target. Every software is trying to be a Jack of all trades. Every simple drawing software tries to be both Disney and Pixar too and every word processing software seems to have the nee to produce websites and newspapers too.

It is simply too much. And the cause of this has nothing to do with user needs. It is all about competition for market shares.

Other issues, perhaps caused by the complexity, is inconsistency, lack of logic, lack of pedagogy, too much special terminology and too many ways to do the same thing. There are examples of software features named one thing in one place and named differently in another place in the same software. There are also examples of cases where there is no way to actually even guess what the software wants you to do at a specific moment. There is no naming standards either so terminology used in different software can mean different things. There quite a few instances where the chosen term in the dialog box does not make any sense at all. The only way to learn is to make repeated errors, talk to others who have don that too plus to call for Support.

It seems like there is no real fruitful connection between programmers, users and the real world. There seems lack quite a bit in consistency checks and pedagogic checks.In short – we need a software revolution!
As we can conclude, there are no “CAD People” – no people made for software. So we just have to start making software made for people instead – let us make “PeopleCAD”!

Or shall we continue doing things like we have always been doing – “…putting out Fire – With Gasoline”?

I received very good comments on the Mac post before – thanks!

There is of course interesting to follow if there will be readers for smartphones analogue to the AutoCAD WS for iPhone. Will there be readers for the other platforms too? Windows Phone and Android….
Perhaps!

But now there is perhaps another item hotter for a CAD reader – the PAD! Note that there are not only iPads out there – almost every brand is trying to get a market share here. There will be a “pad invasion”! As we in Sweden call a toad a “padda”, the obvious nickname for those items are “paddor”, getting almost a Biblical Egytptian connotation to them. If we are now infested with pads we must wait for the mosquitoes next.  Seems there will be a hardware war on the pads.

It all reminds me of the Spaghetti Western “The Good, the Bad and the Ugly”.

But who is really the Good here? We know that the former mayor of Carmel-by-the Sea Clint Eastwood was the Good in the Western, but how to choose between pads?

A crucial element would of course be, for us CAD nerds, if the Pad can handle our CAD viewing needs! And a crucial thing for BENTLEY would be to get Microstation working for nore than one platform too.

As the smartphone really is too messy to really see and a laptop to heavy to bring out into the field – a pad might have its place for us cadders.
But they are not yet strong enough to really work with in regards to MicroStation – but to read dgn files YES!

So my answer to the question in the title is not to choose one – but to choose ALL! Users should not be forced to choose hardware or platform based on software limitations!

As Bentley have splendid developers – Go for Gold! 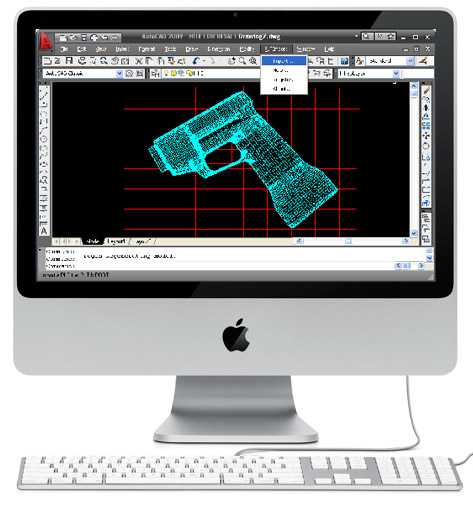 We have been waiting, waiting and then waiting some more. For soon twenty years we have been expecting that Autodesk will finally see that architects and designers love to use well designed tools too. We do not want to be restricted to the regular ugly black or silvery grey box that PCs (desktops or laptops) usually are contained in. Just putting a color or a fancy design on the laptop lid does not do the trick – when we work we don’t see  that side anyway! And when we do not work we keep that laptop in its case…Think it through…We have never understood the logic of trying to design beauty using ugly tools. We have always glanced enviously at the graphic designers  who could use the sleek Macs in their work. The only exception in the architect world has been ArchiCAD and thank God for that exception. I guess a part of that software’s success among architects can be attributed to the Mac version. There even was a Mac version of MicroStation at one time but then Bentley gave up that idea for some reason. But now the Autodesk Giant has awakened! Two things on the horizon – AutoCAD for Mac and an AutoCAD App for iPhone. Starting with the App – yes it i working! You can actually upload a drawing and see it on your iPhone. The app is called AutoCAD WS if you want to check it out. Just tried it myself. So already there… And according to Autodesk the AutoCAD 2011 for Mac is in the pipeline. And then we will be better off to choose which tools we want to use right?

But now interesting questions arise – if Autodesk goes Mac and ArchiCAD has been Mac all the time – What will Bentley Systems do? Get back on the Mac wagon with MicroStation or get permanently lost? Or all the other basically PC based software systems out there? And as there is an iPhone app for DWG already there – can we expect Graphisoft and Bentley to create apps for ArchiCAD and MicroStation too?

The future is a great place – starting in a moment……